A Complete Guide To

1 Overview – Why Study in Montreal

Montreal is a hub for several of Canada’s highest-ranked universities and colleges. You will undoubtedly find the ideal institution in Montreal, whether you choose to study locally or overseas. This decision will be a wise one and a significant investment in your academic and professional career. In this post, you will get to know if Montreal is a good study location for you.

Why Study in Montreal? 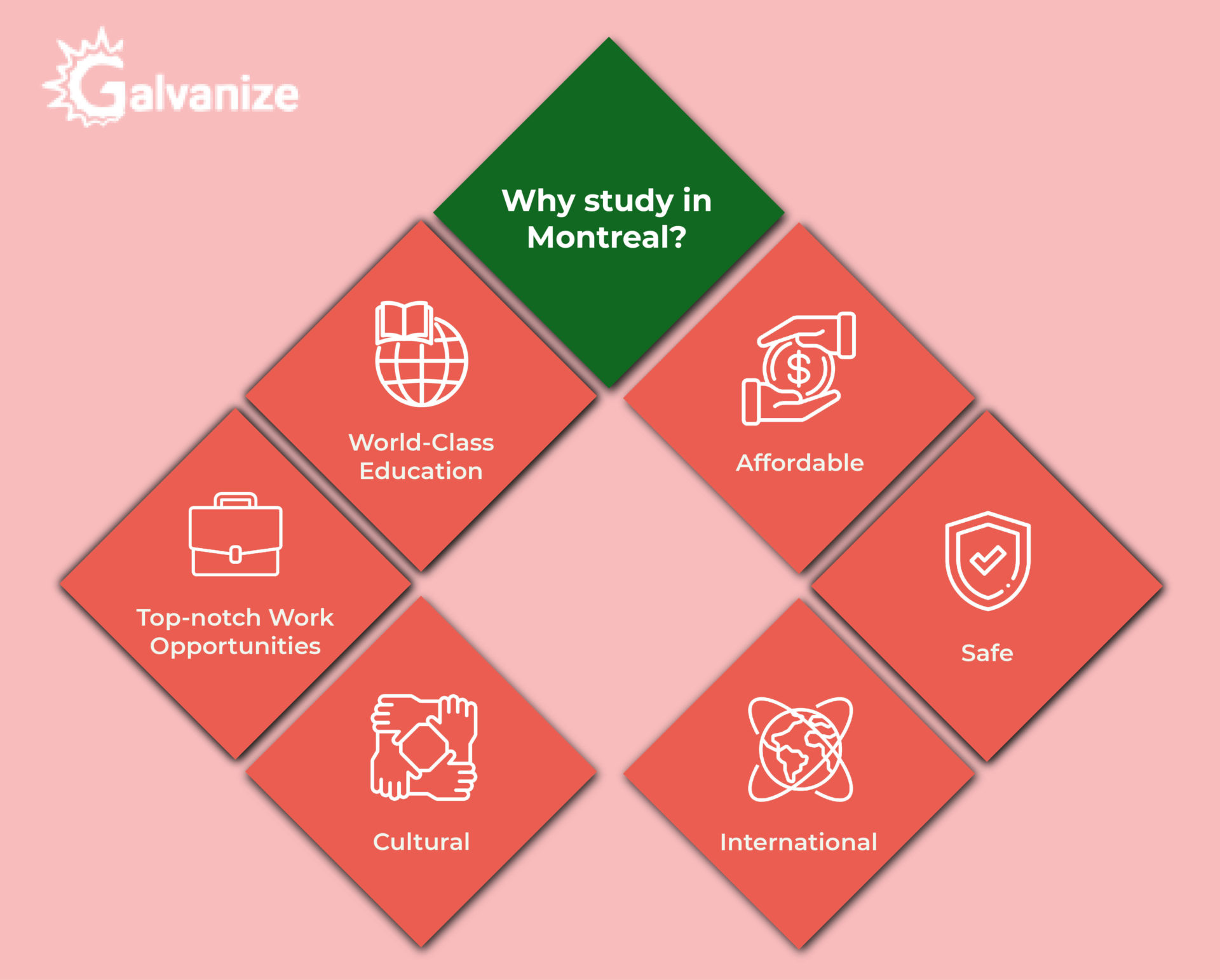 Here’s why you should consider studying in Montreal:

Montreal offers a dozen universities, 60 colleges, and over 50 vocational training institutes, with courses for all skill levels. In the city, there are more than 200,000 students, along with more than 37,000 international students.

The cost of living in Montreal is still quite low despite the fact that it is a sizable, contemporary metropolis. This is especially true when compared to other major cities in Europe and North America, where accommodation is twice as cheap as in many other cities such as London or New York.

Montreal is a major metropolis with all the active culture you would expect, including live music, art galleries, major athletic events, as well as parks, and undiscovered natural beauty. However, it is still reasonably priced. Additionally, Montreal hosts about 120 festivals annually.

In Montreal, 20 percent of people speak three or more languages, and 55% of people are bilingual, primarily in English and French. The city is highly open and inviting regardless of where you are from because over 120 different cultural groupings make up over 23% of the population.

Montreal was ranked fourth in North America and fourteenth overall by The Economist. Safety must be one of your top priorities when studying abroad, but in Montreal, you don’t have to worry about it much.

Like most of Canada, Montreal has a remarkably robust job market that is still expanding. Innovating fields like aerospace, visual effects, computer games, big data, VR technology, life sciences, health technology, and fintech are open to international students with the proper documents. 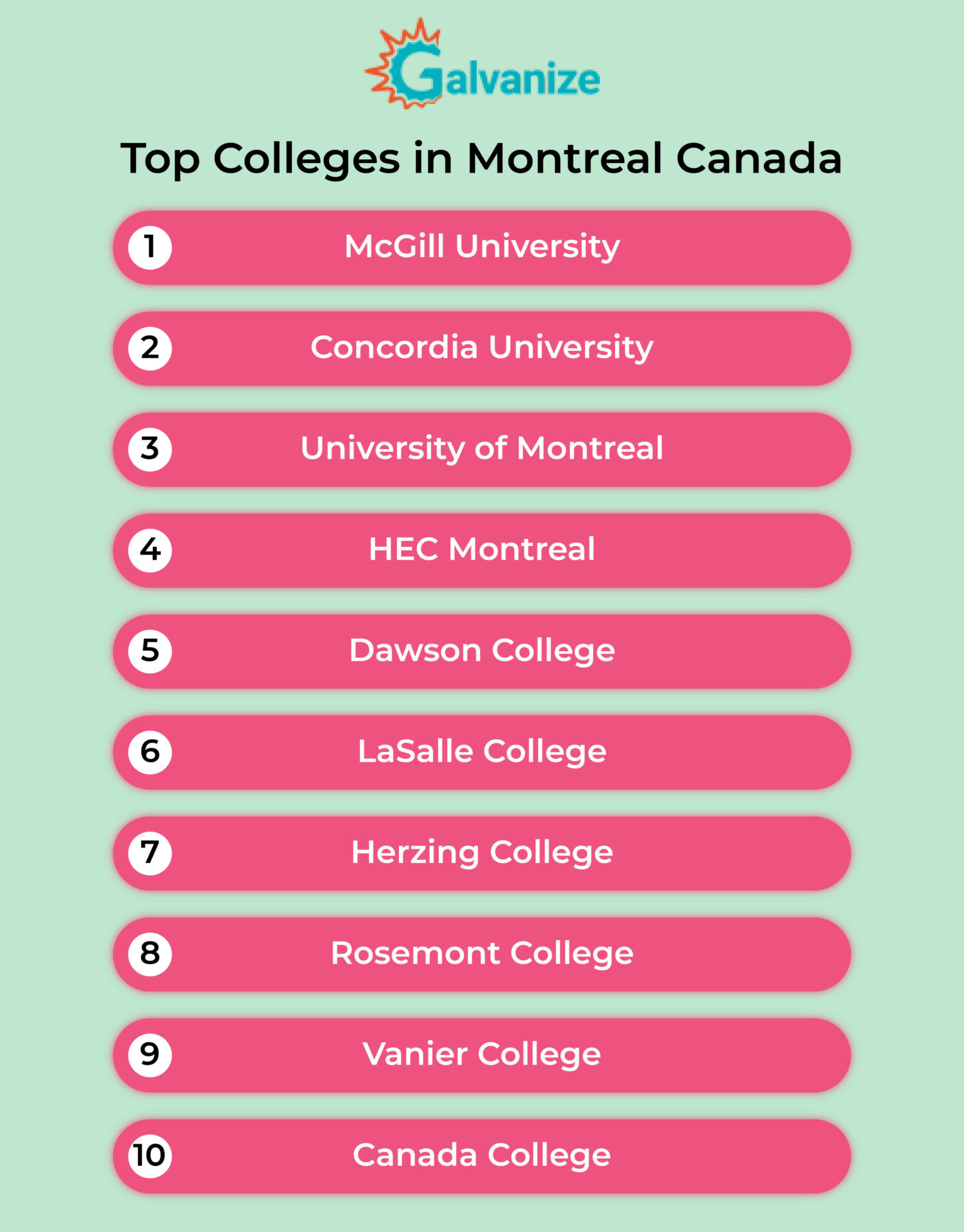 McGill University is indubitably among the top in the world, offering degrees and certificates in more than 300 different subjects. There are excellent funding possibilities for overseas students and also undergraduate and graduate degree programmes to choose from.

The Concordia University offers numerous options for public research as well as BSc and MSc degree programmes. To assist its students in selecting the appropriate courses for their interests and needs, it provides scholarships and 21 departments. There are three libraries available for students to pick from on campus for those who enjoy spending time there.

University of Montreal was established in 1878. This outstanding university grants BSc, PhD, and MSc degrees. For many years, the University of Montreal has consistently held a high position in comparison to other universities. It provides grants, loans, and scholarships for its students and has a sizable alumni network with over 300,000 members.

For its students, HEC provides undergraduate, graduate, and postgraduate programmes. For its MBA programme, which is offered by Canadian Business, it was ranked first among business schools in Canada. Given that it provides courses in both French and English, Writing Universe heartily endorses this university for multilingual students.

Dawson College was established in September 1945. It provides two types of programmes: pre-university and career/technical. Many essay websites recommend Dawson College to people who desire to pursue careers in communication. It grants degrees in the humanities, including literature, anthropology, biology, chemistry, and technology. It also provides degrees in accounting, management, and civil engineering.

LaSalle University is the best choice if you’re seeking professional, college, or pre-university training courses. It was established in 1959 and is one of the top 50 fashion schools in the world. It offers three different sorts of certificates.

The Herzing College provides BSc, MSc, and certificate programmes in business, technology, nursing, healthcare, and associate of science degrees. In order to ensure that its students have access to top-notch education, it also provides campus sites across the nation.

Rosemont College provides a diverse range of degrees and minors. It will assist you in selecting the ideal field for you, including those in English, psychology, the arts, criminology, mathematics, and more. Anyone who hasn’t chosen their major yet should definitely consider this college. You have time to make decisions as you go thanks to the various possibilities.

Vanier College has twenty-five majors to choose from, as well as three-year technical disciplines in Commerce, Mathematics, Liberal Arts, Computer Science, Social Science, and Health Science. It is a public college with a second language that charges locals relatively reasonable tuition.

Canada College, which is now ranked 35th in the globe, is a fantastic alternative for anyone wishing to advance their academic career. To meet the academic needs of everyone, the College provides certifications, diplomas, and associate’s degrees in a variety of subjects.

The climate of Montreal is categorised as humid continental. Summers are typically warm and muggy, with an average temperature of 26 to 27 °C in July, yet they are seldom long enough. More high temperatures have been recorded in recent years. However,  winters are typically lengthy, even excessively so. The winter season typically begins in mid-November and lasts until March, occasionally into April. When it snows, temperatures are often mild, making this the ideal time to go outside and enjoy outdoor sports like skiing, snowboarding, sledding, and more!

The winters in Montreal are cold, windy, snowy, and even icy. Even though the air temperature never drops below 30 °C (22 °F) annually, exposed skin frequently feels as though it does because of the wind chill. To enjoy this season, you’ll need warm winter clothing and boots. Despite the high cost of winter clothing, there are numerous secondhand shops that sell good clothing for a fair price.

Although they are both seasonally mild, spring is more susceptible to abrupt temperature swings than fall. Both “Indian summers” and late-season heat waves are possible. Early- and late-season snowstorms can happen in November and March, with April seeing fewer occurrences. From late April until late October, Montreal often experiences little snow. Autumn is a wonderful time to see the stunning colours of the trees. Snow does, in rare instances, fall in early to mid-October and early to mid-May.

There are 1.7 million people living in Montreal currently.. As a result, it is Canada’s second-largest city.

The most significant financial advantage for someone residing in Montreal is that property and rent costs are frequently less expensive than those in many other Canadian cities. Rent for a nice room in a shared flat in a secure neighbourhood of Montreal can be as low as $500 a month, with some one-bedroom units beginning around $700-900. These are the minimum amounts; you might expect to spend more based on your preferences and expectations.

The cost of household utilities is often billed on a monthly basis and is relatively reasonable. Overall, Montreal’s cost of living is reasonable, however, this is partially compensated by slightly lower incomes and higher taxes than the country as a whole.

Check out the table below for more details:

Montreal is a very diverse city that draws inspiration from a variety of sources. Montréal is particularly alluring to both Canadian and international students due to all of these elements as well as the city’s warmth and variety. Education was your top consideration while deciding to study abroad. Along with everything else, Montréal is a hub for some of the top educational institutions.

Montreal combines all the best elements of Europe and North America, as well as all the best elements of North America. It is renowned for its easygoing yet energetic way of life, distinctive and innovative industries, nightlife, and café culture. You have the option of exploring the contemporary, high-tech buildings in the downtown area or strolling through Old Montreal’s winding cobblestone streets.

Is Montreal cheap and affordable for international students?

In Montréal, it’s feasible to live comfortably on a limited budget. The city has one of the lowest living cost rates in the world, making it the perfect choice for international students in terms of everything from accommodation and transportation to food and entertainment.

How can I get PR in Montreal?

Here are a few options to get PR in Montreal:

Is Montreal a good place to live?

Montreal is rated as one of the most livable cities in the world and is regarded as one of the happiest places on earth. It is a popular option for people wishing to go abroad, with 45.000 immigrants choosing to settle in the city each year.

What are the crime rates in Montreal?

The city of Montreal is safe. With 4,100 incidents per 100,000 residents in 2015, it had one of the least crime rates among Canada’s big cities. In the city, non-violent crime predominates. They mainly involve theft and vandalism against property.

What is the average rent cost in Montreal?

Is Montreal better than Toronto?

Toronto is the best city for making money. Montreal is more laid back, and the magnificent European influence in the city might give you the impression that you are living in a foreign country. Nevertheless, that comes at the expense of higher living costs and a lifestyle that is much more focused on work.