A Complete Guide To

Do you aspire to pursue your dreams of studying in Sweden soon?

You are in the right place. This blog discusses in detail about all the details that’s required to get a clear idea of what’s needed and which university to go to for your specific field of interest

CHAPTER 1 : WHY STUDY IN SWEDEN

1) Impact of Coronavirus on higher education in Europe - safe or not?

No face-to-face teaching or exams: Classes resume online to reduce the spread of the virus across the country. Exams postponed or held in different ways.

Restrictions on immigration: Many countries are restricting international travel. Only nationals or permanent residents are allowed in, save for important exceptions.

Eligibility for admission: Delays in earning your high school diplomas or college degrees can affect your ability to meet the minimum eligibility requirements.

2) Why should you apply to universities in Sweden?

During your studies, you’ll learn how to balance different interests, needs, and ideas to bring out the best in everyone and solve complex issues as a team – vital skills for your global career, where teamwork across cultures is the norm.

Many degree programs in Sweden include internships, which are a great way to get real-world experience while building your professional network. If you’re interested in research, pursuing a master’s in Sweden can be a great way to make contacts to carry on and do a Ph.D.

6. Bonus: Life in Sweden is international student-friendly. English is an important foreign language. Transport is reliable and efficient, and most international students can work. After completing your studies, you can apply to extend your residence permit to search for work for up to six months.

Students coming from developing countries might find the expenses to be quite high. Sweden does charge a tuition fee for international students who are also faced with the added problem of accommodation/apartment hunting in Sweden, which can be pretty challenging and expensive. Since the word “expensive” might differ from one to another, here’s an example: The average rent in Sweden is close to $1000.

The climate in Sweden can be really cold all around the year, except for a few months of summer. While many of us from developing countries do not mind extreme weather conditions, you might want to think again before coming to Sweden. Winter can be extremely dark and cold, unlike many other countries.

Part-time jobs can be very competitive in Sweden even though the pay is quite decent. Then again, the money one would earn from part-time jobs would be spent entirely on rent and food, provided one gets the job.

Apartment hunting can be very hard in Sweden since many flats are too old and overpriced. This is one of the common concerns among people who have relocated to Sweden.

In conclusion, if you are financially stable and can manage your expenses throughout your studies, and if you don’t mind the dark winter cold, then Sweden is an excellent option for you.

3) Is Sweden safe for asian and african students

Sweden is considered a very safe country for international students in general. Acts of crime against Asians and Africans have been low, and people are generally polite and respectful.

But no matter which country you go to, there will be some people who are not very fond of immigrants. You are bound to face some level of racism everywhere. But overall, safety is guaranteed when it comes to studying in Sweden for international students.

4) Salary and employment opportunities in Sweden

The first thing that comes to our mind when we think about studying abroad or settling in a particular country is this:

What is the salary range I can expect in this country for my career line?:

The median salary in Sweden is 61,200 USD. This means that more than 50% of the Swedish population earns less than this amount.

Also, do note that the annual salary increment in Sweden is around 6% on average.

But it would be best not to concern yourself too much with these details. You can get substantial salary hikes in your company, provided it is a startup with a lot of incoming investment, and you are one of the major contributors to the company.

The business landscape is rapidly changing, so worrying about increments would be unnecessary.

Here’s a salary calculator for your specific job role: https://teleport.org/cities/stockholm/salaries/

Note: Taxes in Sweden can be over 30% for moderate salaries, and it can be over 50% if your salary crosses a certain limit. This number changes periodically, so it’s better for you to check at the time of your relocation.

Job hunting can be difficult in Sweden, but the salaries are high, and the work culture is said to be hospitable and highly collaborative.

Requirements to study in Sweden

The requirements for a bachelor’s program in a Swedish university are pretty simple and straightforward.

This just means that you need to take an internationally recognized English proficiency test like IELTS or TOEFL and make sure it meets the requirements for the branch and university you are applying to.

Entry requirements for getting a master’s degree from a Swedish university is as follows:

Entry Requirements for a Ph.D. from a Swedish university is as follows:

TOP UNIVERSITIES AND SCHOLARSHIPS IN SWEDEN

6) Closer look at the top programs in Europe

Most popular programs below: 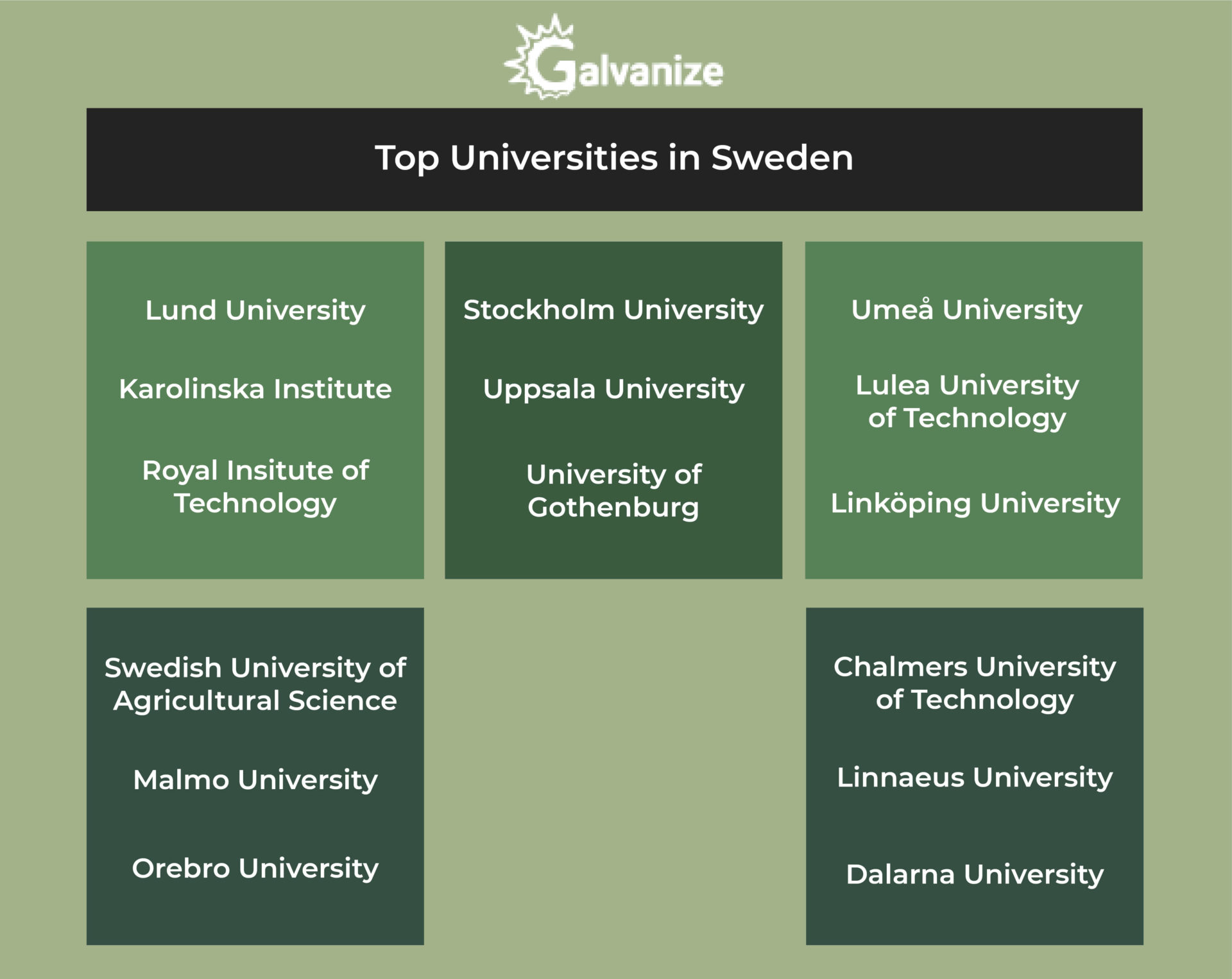 Now, there are alot of students from developing countries who are not financially very strong at the moment but still find a way to study in Sweden using these low tuition universities, scholarships and by working part time. 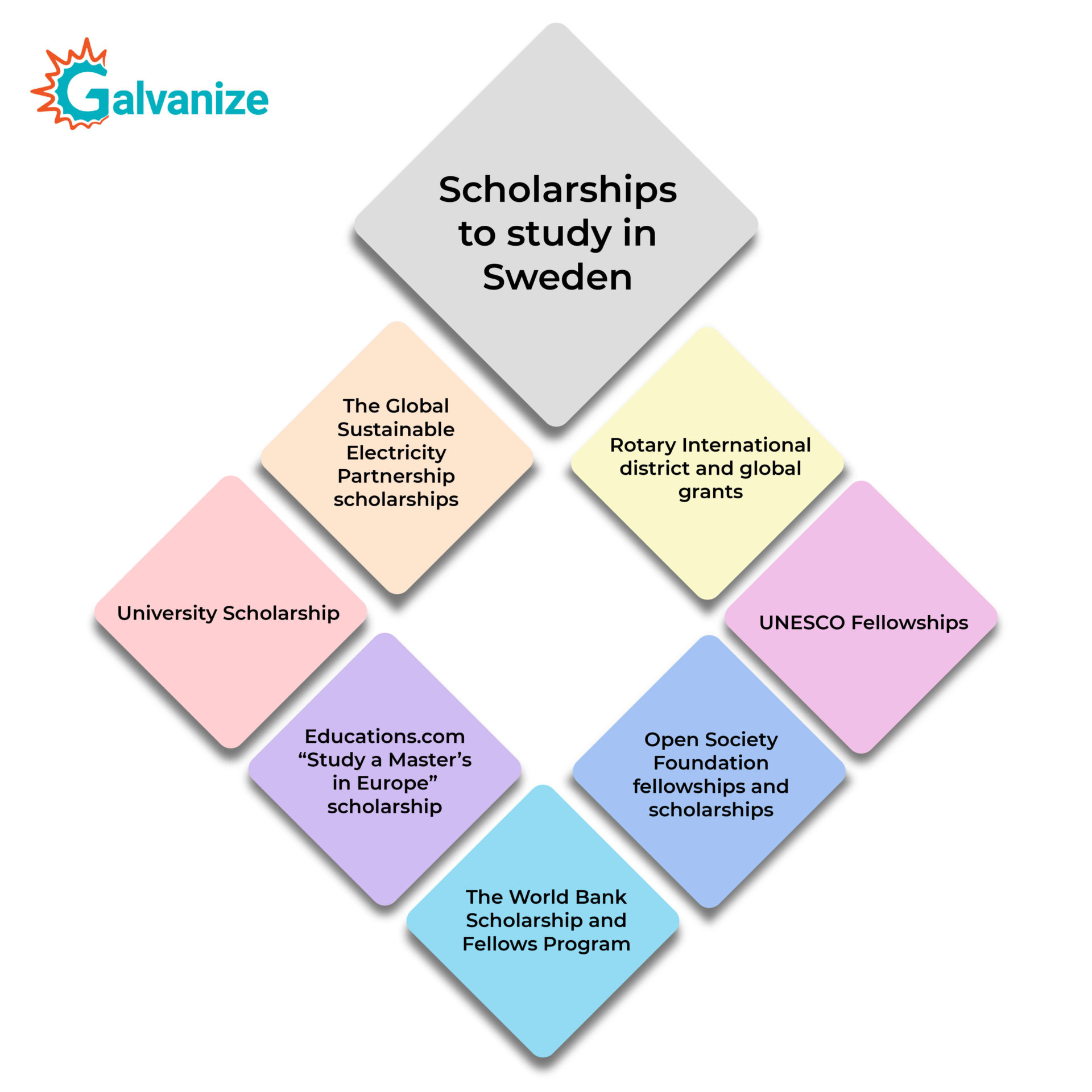 The program is open to applicants from selected countries on the OECD/DAC list who have work and leadership experience. To know if your country in on the list click on the link : https://www.oecd.org/dac/financing-sustainable-development/development-finance-standards/DAC_List_ODA_Recipients2018to2020_flows_En.pdf

APPLICATION PROCESS AND EXPENSES FOR STUDY IN SWEDEN

8) Application Process and Documents required to apply to Sweden

You Should know about Application to Sweden Universities

Step 1: Finding out what are the documents that you need to submit

Step 2: Checking for special instructions for my country of study (For eg.Education Qualification)

Step 3: Making sure the  documents are officially issued

Step 5: Submitting all your  documents can be done online

8.3) Courses and their tuition Fee

A standard range of tuition fees per year for various subjects

Please Note: Tuition fees in Sweden vary depending upon the subject. The average fee for a master’s programme is SEK 129,000/year 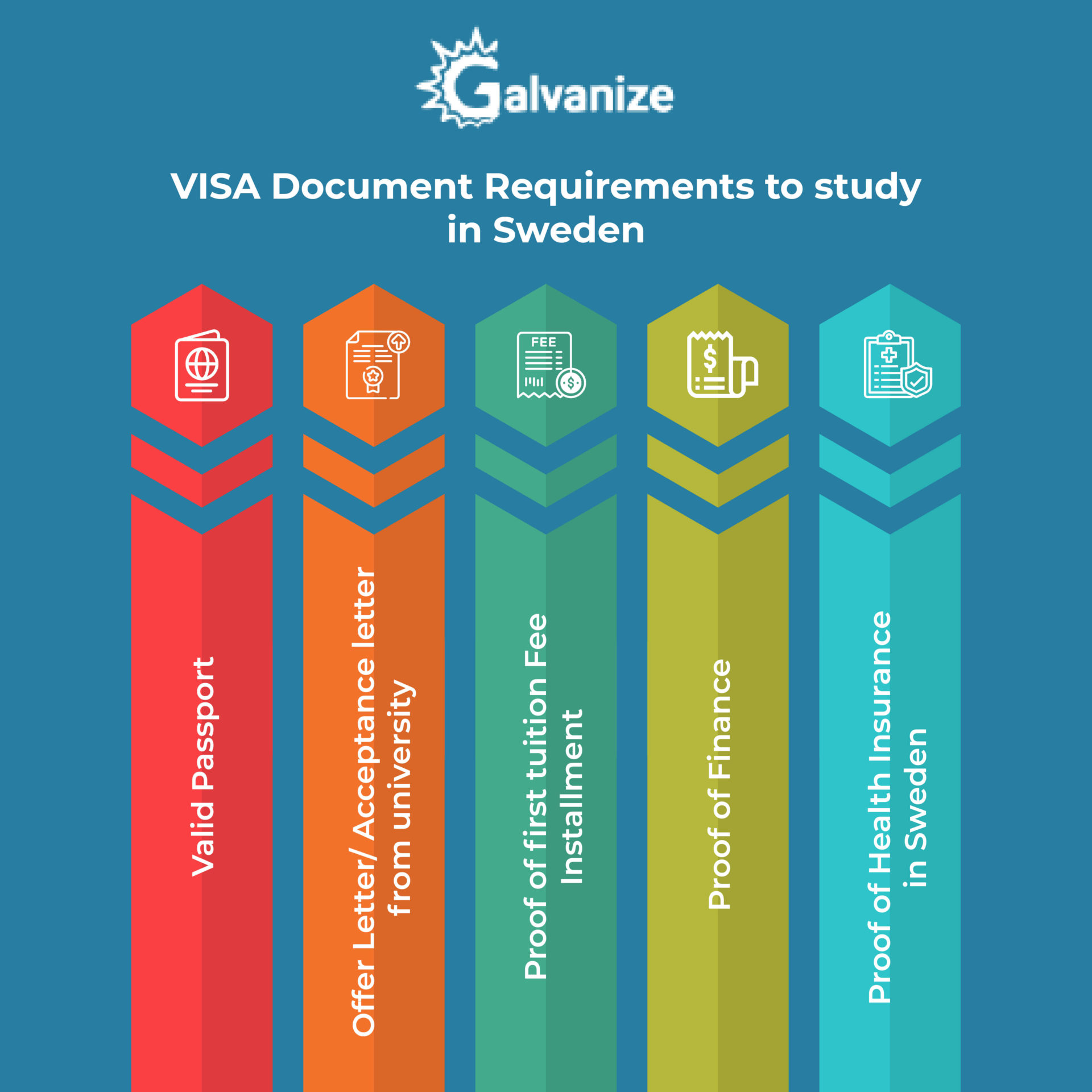 The Swedish Migration Agency requires you to show that you have health insurance when applying for a residence permit. Refer to this webpage on health and insurance to learn how to fulfill this requirement. You can also attach the ‘Terms & Conditions’ document for the FAS+ or Student IN insurance.

9.3) Application and Documents for Work Permit

To apply for a work permit without leaving the country, you should:

To obtain a work permit, you must :

Please Bookmark this page. Webinar access links will be shared a day prior!